A Social Impact Company: The Story Behind Angel Guard Fashion 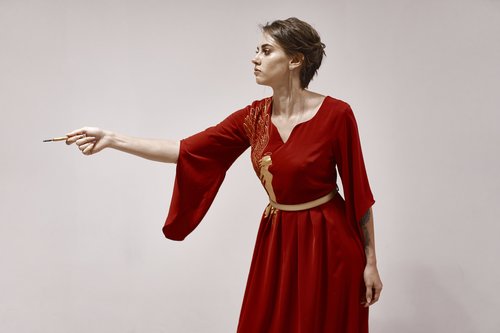 In entrepreneurship, we are focused on success, wealth and seeing a business succeed. And we should be. The dynamics that it creates and the possibility to change someone’s life with a product alone is unprecedented and powerful within a social impact company.

But as an entrepreneur with a focus on marketing, I found that build momentum with other businesses was not making the impact that I felt I could make in the world. It did something, but not enough.

As I saw the dynamics surrounding me from travel, from stories, from friends and from strangers that I met, it led to a strong, deep desire – to do something to change the circumstances of those who suffered most.

A social impact company that is truly dedicated to their business are also focused on this intention. With innovation alone, we can positively or negatively impact what we contribute to society.

I always look at what this means and what every innovation I offer brings back to those who are surrounding me.

One person changing their life story changes everything.

That’s the true power of entrepreneurship.

There are so many of us that are working toward prevention of violence, stopping sex trafficking and speaking out against harassment.

But while it continues to grow in the need to have impact, the epidemic of violence continues to rise. While a social impact company has a desire to transform their surroundings, more innovation is needed to create a difference.

So what is it that is really missing?

If a violent epidemic moves into a broadcast every 13 days, then violence increases. It is a part of the subconscious that responds and in which violence becomes accepted.

The battle against violence does not start or end with violence, but rather, everything that surrounds predators and how they respond to their victims.

More importantly, there is the need to challenge some components of companies which do not believe that violence can be prevented and that it should be accepted.

There is also a need to challenge the system which believes that criminal activities such as harassment, rape, violence, kidnapping or other vicious attacks are measured and weighed as almost as petty offences. This comes from the statistic that only 2% of those who attack someone are tried in court and of those, less than 1% are held in jail and most sentences are 6 months or less.

This leads to one conclusion – every individual must protect themselves. We, as empowered beings, must work toward our own prevention, intervention and justice in every scenario. This is how we change the statistic.

Where Does Inspiration Start?

The statistics speak loudly to me when it comes to creating a social impact company.

But the experiences I recount in the seed and growth of Angel Guard Fashion is even more pertinent. It surrounds me in my motivation to create and lead to the success of the company.

While entrepreneurship and a strategic marketer is my original calling, I also play music and find great joy in composition and performance.

So I created a complete set of music about angels, tapping into how they think, what they do, who they are, how they guide us.

It so happened that I was travelling and there was a performance opportunity. I was performing three times a week, 5 times a day and even in front of a crowd of 10,000 people for a special celebration.

In each performance for 3 months, there was one individual who came to every performance and sat in the front row. Before I would even start, he would close his eyes and go into an altered state.

In tribute to a favorite fan, 🙂 I decided to take him out for tea after my last performance. His heart opened quickly as he told me a story that I will never forget.

He told me that when he listened to my music, it changed his heart. He felt like he was healing from a trauma that had haunted him for years.

He then recounted every detail of what happened. He was madly in love with a woman and was preparing to marry her. To have enough for their wedding, he traveled overseas to earn enough money to take care of her.

While he was gone, Christmas Eve set in. She went with a group of friends to a party, trusting them to the circumstances. She was drugged with her drink, and for the rest of the night until dawn, was beaten and raped to her death.

He knew the details of what happened. He told them to me one by one. And he told me of the guilt and burden he carried for 25 years. He never looked at another woman, never recovered from the trauma and was afraid to get close to anyone in his life.

His feeling was that the music was the angels, and even his fiancee, coming back to him and letting him know that it was time for him to heal.

I will never forget the power of that story and the realisations it not only gave to him, but also to my journey.

Over the next year or so, I heard many more stories of violence. Where engineers that were women were beaten randomly. Where individuals lost a loved one. And where even women were seen being raped in broad day light.

I believe that was all a sign. As I saw more, I felt that I had to find an internal power inside of me that would work toward a sense of change that could help to change the random acts of violence.

Social Impact Companies Start With One

After seeing and hearing of too many incidents, I set a challenge. Would if I could prevent one violent incident from happening? Would if I had the power to intervene and stop the attack? Would if I could stop that kidnapping and build a happily ever after because the violence was just erased from ever happening?

That’s how Angel Guard Fashion started. I knew that I could help someone heal from a traumatic event. Now, I wanted to challenge myself with the concept of a social impact company. I wanted to stop violence from occurring completely.

If I could create one incident that was prevented or intervened, if I could lead to one more act of justice happening as a result of violence – then things would begin to change.

Peace is the cross of swords. It is the stale mate. It is one the predator cannot attack the prey. There are no more moves and it is forced to stop in its footprints.

If an incident of violence that occurs once every 13 days creates an epidemic, then so can the reverse.

An incident of peace that occurs once every 13 days creates an epidemic of peace.

Let’s start this with the social impact company statistical goals.

Go a step further. The ROI of companies is based on a wealth formula, which determines the success of a company.

The market value of Angel Guard Fashion is based on the number of incidents which occur. Over 35% of women alone have been sexually assaulted according to the UN.

That’s 1.2 billion women in the world that are assaulted. To reduce violence, a total of 306 million women need to be reached which use prevention and intervention tools.

The partnership program that is offered through Angel Guard Fashion can infiltrate entire communities of up to 5,000 individuals at one time. That means that if we offer versions of the line in 30,000 communities (some very small areas), then we can reduce up to 15% of violent attacks, give or take the ratios of what happens.

The design, structure and expansion of Angel Guard Fashion (to be unraveled) all leads to a successful social impact formula.

The numbers are plausible, even for a beginning entrepreneur that is working toward a mid size to large scale business.

When we are speaking about a social impact company, it is that type of formula and number that we must look at, defining how many individuals we can help.

Yes, it starts with one. And, amazingly, it can end social problems in a powerful way that allows us to heal as a society.

What did I really learn from the tragic stories and events? It wasn’t related to healing trauma or feeling the pain of those around me.

It’s that, as individuals, we must empower ourselves. Not being a victim is a great start. But more than that, we must become confident, free and ready to build our own beauty as human beings.

Violence ends within us. It is in our own awareness and decision not to accept the growing epidemic that allows us to become even more beautiful, powerful and without objectification to the current statistics.

Angel Guard Fashion was built for empowerment. It was designed for beauty.

Angel Guard Fashion was created as a social impact company to show to the world that we can, and will, see peace.